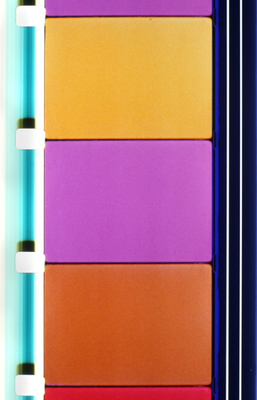 Most reckless things are beautiful in some way, and recklessness is what makes experimental art beautiful, just as religions are beautiful because of the strong possibility that they are founded on nothing. – John Ashbery

I happened to be visiting Canyon Cinema when Collection Manager Seth Mitter was inspecting their print of N:O:T:H:I:N:G (1968) a couple of days ahead of its screening in Oakland. As is often noted, this is a film that demands to be understood as both an object and projection. Viewed on the rewind bench, the mathematical precision of Paul Sharits’ montage is readily apparent. Projected, the flicker effect floods the rational faculties. What so impressed me viewing Canyon’s worldly print, which is nearly fifty years old and looks it, is the way this dual nature itself evolves with conditions. The film’s purity foregrounds the print’s impurities: tramlines imposing unintended continuity between the alternating frames of color, specks of dirt randomly affixing themselves to the very form of the film. But while N:O:T:H:I:N:G‘s hallucinatory force is undoubtedly compromised by these degradations, its clarifying effect remains. Each run through the projector leaves its mark—to be revived and compounded by each subsequent screening (living and dying being two names for the same process). In Sharits’ film, these antecedents take hold with an immediacy that feels uncanny rather than sentimental. I hope that Canyon receives a new print of N:O:T:H:I:N:G, certainly, but also that they retain this relic for the cinematic equivalent of the charnel ground contemplation.