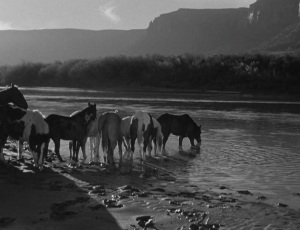 The day before learning that Gilberto Perez had died, I plucked his book The Material Ghost: Films and their Medium off the shelf hoping to find a point of reference for some of my recent notes on documentary style. As usual, I was not disappointed. The Material Ghost is one of the very few perennials shelved under “Film Studies,” a true north for thinking and writing well about movies. I only met Perez once, when we sat next to one another at a screening of Ernie Gehr’s films. I introduced myself, and somehow – I do not remember how – our conversation turned to the riches of Ford’s Wagon Master. Even amidst the din of a sold-out show, I remember his conversation being calm, lucid, welcoming.

Here is that passage. Watch how he drives away the inane preoccupations of much documentary criticism (i.e. “But is it true?”) in one clean stroke:

…Reality is as commonly attenuated, and as rarely confronted, in films now as it was then. The call to confront it, however, has recurred throughout the history of cinema. Taking the camera our into the world, into the thick of concrete things, has been a vitalizing impulse, at different times and places since the Lumiére beginnings, for such various filmmakers as Flaherty and Vertov, Keaton and Eisenstein, Dovzhenko and Vigo, Buñuel and Renoir, Jennings and Rossellini, De Sica and Satyajit Ray, Rouch and Pennebaker, Ford and Nunez and Burnett, Kurosawa and Gutiérrez Alea and Pereira dos Santos, Godard and Sembène and Kiarostami, Antonioni and Straub and Huillet. Not satisfied with a veneer, these filmmakers have sought from reality something richer and stranger, of more potency and consequence, but also, in just that measure, harder to deal with coherently, more resistant to articulate arrangement. For there lies the problem reality poses to the filmmaker seriously aiming to engage it: the closer the engagement to reality, the more difficult the task of giving it form and meaning. The remove of the film images makes the things of reality easier to handle, more amenable to the workings of art, and by keeping things at a far enough remove incoherence may be avoided, but so will any genuine engagement with reality. The risk of incoherence must be run, unruly reality met on a ground close enough to its own for it energies and its resistance to come into place. Only by contending with its resistance can a filmmaker derive from its energies, and arrange into expressive structures, a vividness and force that tell on the screen. 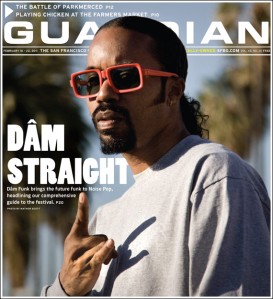 The San Francisco Bay Guardian disappeared this week, the latest of the alt-weekly extinctions. I credit my education as a critic to the Guardian, specifically to the editors who encouraged my pitches from the time I was an intern in the fall of 2004. I studied film in college, but it was only in  contributing to the paper that I began to figure out why writing about cinema mattered to me. Early reactions to the paper’s demise are focusing on its progressive character, but I want to emphasize that the Guardian’s politics—its advocacy work—extended to its arts pages. Once upon a time I remember opening each issue genuinely curious to see what was being covered. The paper’s independence was a tangible thing, readily apparent in the editors’ willingness to clear space for writers to chase after private enthusiasms and bête noires. At its best, that sense of trust extended to readers. I can think of so many great artists and events that would only be covered in the Guardian; it felt vital in that way. I don’t want to romanticize the thing, especially since it stopped being an independent paper two years ago. Still, there’s no denying the loss. 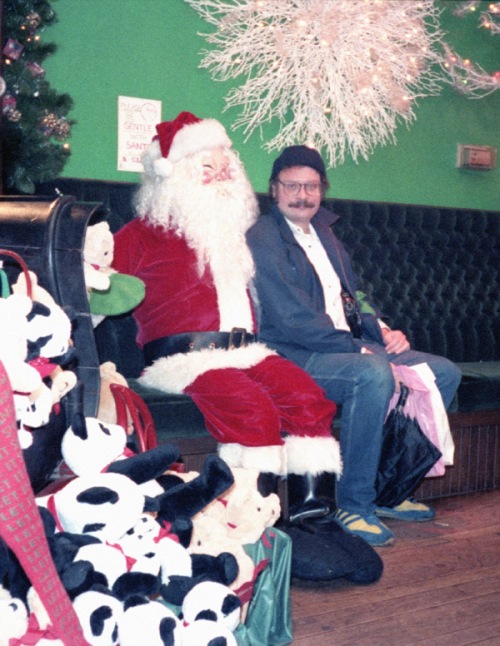 Jean-Pierre Gorin showed slides of Walter Benjamin and the Kuchar brothers as children during a lecture on the Dziga Vertov Group a couple of weeks ago at the Berkeley Art Museum and Pacific Film Archive. He also referred to George Kuchar’s “blessed simplicity” as a kind of American ideal…

I’m still trying to make sense of the comparison, but in the meantime my piece on the recently published George Kuchar Reader ran in this week’s Guardian. The book will be celebrated next week with screenings at the Exploratorium and YBCA.

A Bright and Guilty Place 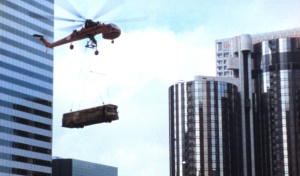 Back in California and back to writing for the San Francisco Bay Guardian. First up, a quick take on Los Angeles Plays Itself:

Remastered and newly cleared for fair use, Thom Andersen’s incisive 2003 film essay on narrative cinema’s many representations and misrepresentations of Los Angeles plays a single night at the Castro. Andersen’s impressively choreographed montage zigzags through a vast litany of film history, submitting erotic thrillers, middlebrow Oscar bait, and avant-garde outliers to the same materialist protocol. Observing Hollywood’s tendency to falsify geography and transform landmarks of modernist geography into villainous hideouts, Andersen’s treatment of mainstream ideology is acidly funny but never condescending. To the contrary: Los Angeles Plays Itself is driven by an unshakeable faith that another kind of film — and with it another kind of world — is possible. In methodically deconstructing countless car chases and phony denouements, the native Angeleno lays groundwork for the fresh appreciation of the diverse neorealisms found in the work of directors like Kent Mackenzie (1961’s The Exiles), Nicholas Ray (1955’s Rebel Without a Cause), Fred Halsted (1972’s LA Plays Itself), Charles Burnett (1979’s Killer of Sheep), and Billy Woodberry (1984’s Bless Their Little Hearts). A true work of termite art and an impassioned argument for “a city of walkers, a cinema of walking,” Los Angeles Plays Itself is the closest thing to a cineaste’s Death and Life of Great American Cities. (2:49) Castro.

This song is copyrighted in the U.S., under seal of copyright #154085, for a period of 28 years, and anybody caught singin it without our permission will be mighty good friends of ourn, cause we don’t give a darn. Publish it. Write it. Sing it. Swing to it. Yodel it. We wrote it, that’s all we wanted to do.

In Praise of Elizabeth Russell 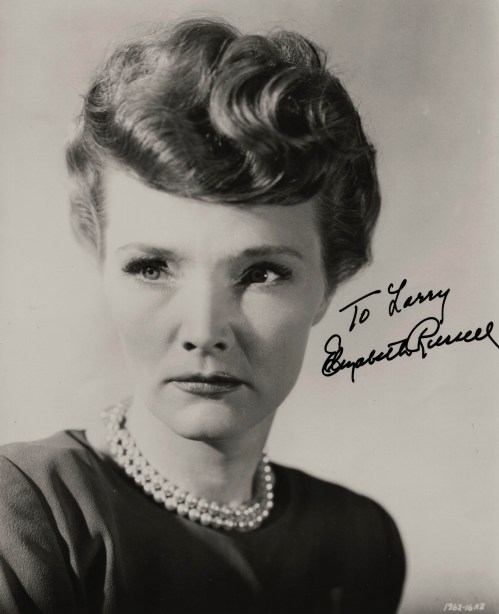 The Serbian woman in Cat People who disrupts a wedding party to call Irena (Simone Simone) out as a kindred spirit; the anguished shut-in of The Curse of the Cat People, pure product of a stifled childhood; the consumptive neighbor surrendering herself to a certain death in The Seventh Victim. If we follow Alexander Nemerov’s contention in Icons of Grief: Val Lewton’s Home Front Pictures that such cameos exert a kind of silent authority over Lewton’s subterranean cinema (the shared emphasis on bit players being one of many suggestive suggestive links with Preston Sturges, whose run at Paramount almost exactly coincided with the RKO period), then Russell is the most privileged figure of this uncanny elect, running like a red thread through Lewton’s films.  In Cat People, she brings the party and the film itself to a standstill. Any lingering uncertainty as to whether the fantastic curse is “true” falls away; with Russell’s entrance, the suggestion is  damning enough. Where the other returning actors in The Curse of the Cat People more or less reprise their earlier roles in Cat People, Russell has metamorphosized into the tragically spurned adult daughter; in some subliminal way, at least, she is the point at which the plots break down. As the consumptive  in The Seventh Victim, she finally stands wholly outside plot—a hallucinatory vision of the death drive in this, Lewton’s most personal and harrowing film.

Reviving an old “conversation” here between Jacques Tourneur’s inexhaustibly beautiful I Walked with a Zombie and Kenneth Anger’s equally enigmatic Rabbit’s Moon in honor of the Harvard Film Archive’s upcoming Val Lewton retrospective. I wrote the notes for the series, “The Glitter of Putrescence – Val Lewton at RKO.” 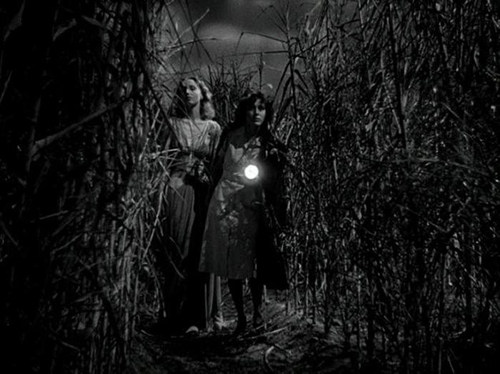 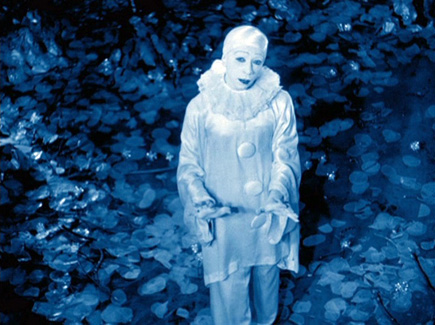 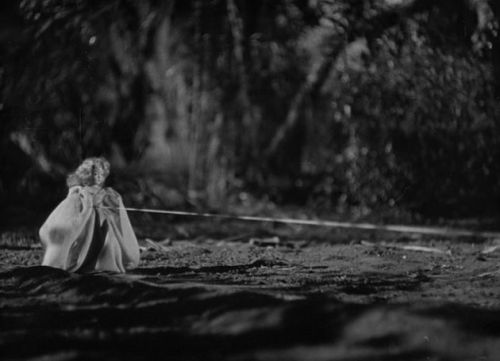 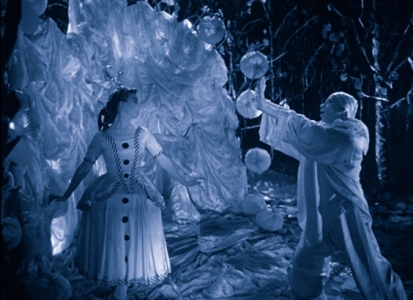 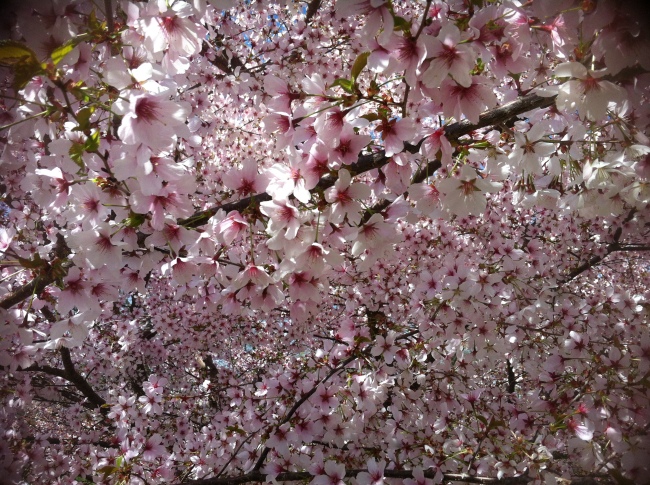 His was a strange homecoming.